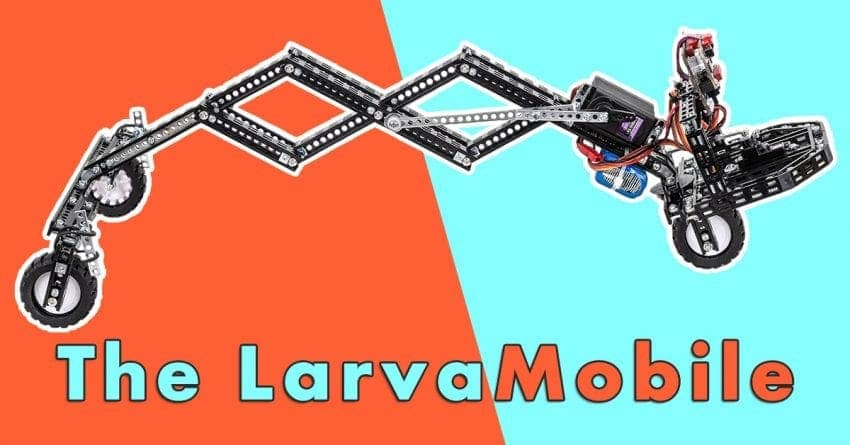 Some time ago, I saw a small LEGO model kind of crawling forward like a Larva. It had a funny walk and I wanted to make one with Totem. I wanted to make it larger and sturdier, and also remote controlled with stride, speed and steering. Spoiler alert: an improved version of LarvaMobile with instructions can now be found as one of 7 models included in the Robotics Kit. 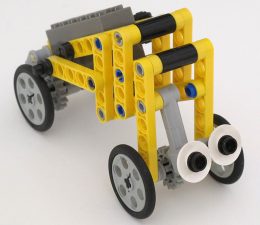 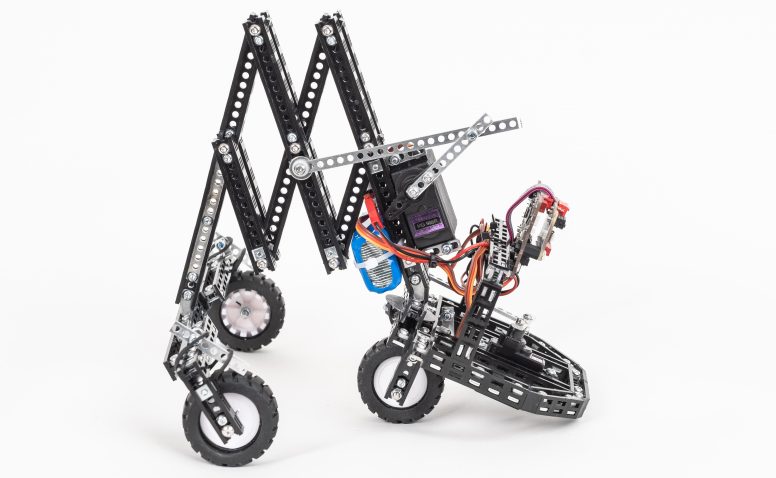 My Totem LarvaMobile finished model. Stretched in the upper image, and contracted in the lower one.

Before I started to build the Totem LarvaMobile model, I googled and read a little about the mechanical principle of these constructions. It has been known for centuries at least, and for many different purposes as well.

The Lazy Tongs, or Scissors Mechanism, or even Pantograph mechanism is a rather cool way of transferring force and movement along an axis. It stretches in and out on a straight line, and acts as a kind of gear, making either a movement faster, or slower and stronger.

Below are some examples from mechanical history, ancient and new. The left image shows a drawing from 1459 by Hans Talhoffer. The drawing isn’t really good, seems it doesn’t have any linkage or hinges where it should. (Lazy Drawing of Lazy Tongs maybe)

Then a modern use of the same mechanism in the middle.

The rightmost image is from 1884, a lazy tongs Corkscrew. This device uses the mechanism to multiply the force used to open a bottle cork, since the arm pulling will travel maybe more than 4 times as long as the cork itself, thus making your arm force stronger, and it’s easier to open the bottle. 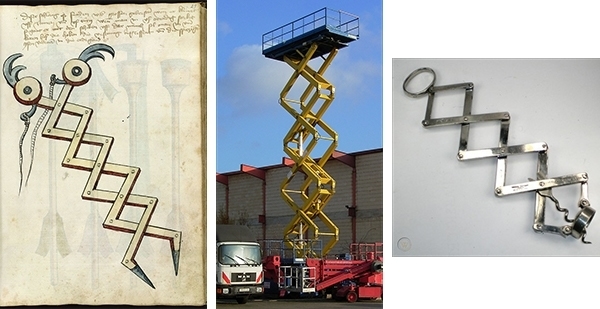 An important feature of such a “vehicle” as the LarvaMobile, is that the wheels must be blocked to run backwards. So, I had to figure out a kind of a “ratchet” mechanism for the wheels. Fortunately, the wheels we use for some of Totem models, like Mini Trooper car kit and Gripper Bot car kit, has grooves in the rubber and with an aluminum strip bracket it was easy. 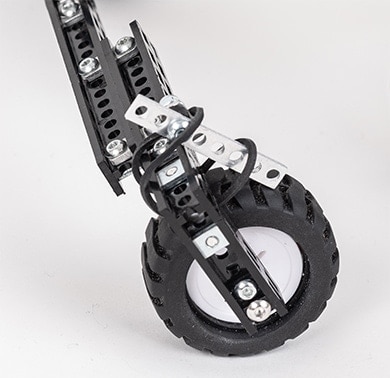 In the image above, you can see how I did it. The strip bracket is hinged on the L-twist bracket and will stop the wheel from running backwards. I used a rubber band to apply some slight down-force on the bracket. But very little is needed, so maybe even some small weight could be enough. But a rather loose rubber band did the trick.

When designing in Totem, I very often like to design on the computer before trying it out with parts. But sometimes I want to try out parts of a design before going further with 3D designing. I will often go:

That way, I can start to build and test if my 3D design is any good in real life.

I am using SketchUp from Trimble as 3D design tool. Many other tools can be used as well, but that’s the tool I learned many years ago, so I’m stuck with it.

SketchUp has a free version and is easy to learn. We also offer a complete Totem 3D library for SketchUp free to download. It’s the same I use when designing Totem projects.

Above you can see snapshots from my building process. I started with the “scissors” and the back part. I had to enforce the back parts after trying what I built. It was to wobbly, but some double beams and strip bracket enforcement fixed it.

Below you can see the enforced back part. In my first attempt, I had only one single beam across. It was too wobbly, so I wanted a 2-beam construction. That helped a lot.

I cheated a bit by cutting the single beam in the middle and attaching another beam to strengthen the back part. I also added an extra 45×90 bracket, so that the scissors had stronger connection to the back part. 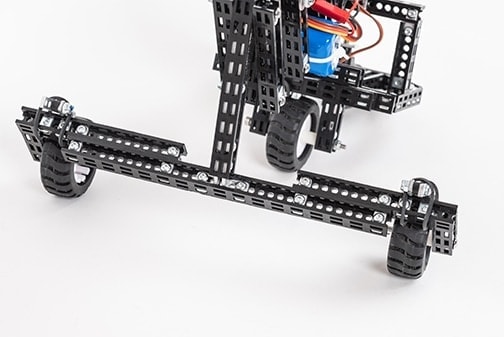 The image below shows the final front part, where the servo motors are attached. You can also see a 7.4V Li-Ion battery. I used a Zip tie to fix it.

An interesting effect of this design is that the front of the LarvaMobile will tilt up and down as it contracts and expands. There are different ways to prevent this, I have seen it in designs for other purposes, but in this way it’s a much simpler design. As long as the front part and servo doesn’t touch the ground when fully contracted, it works fine.

You can also see how the push/pull servo is connected on the scissors, making a short travel in the servo arm become a long travel on the back wheels. It’s almost as if the scissors mechanism is a “length-amplifier”. 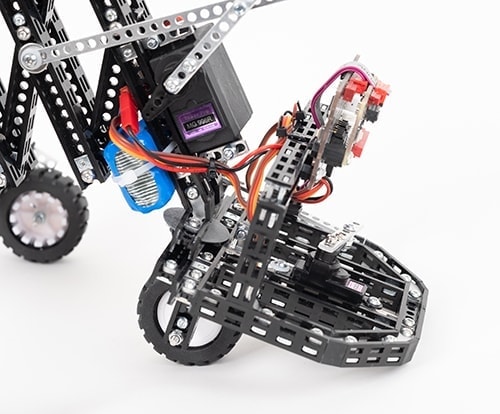 The servos and electronics module

The motion and steering of the LarvaMobile is done with levers and locomotive action. This can be achieved by normal DC motors, but it’s easier with servos. With DC motors you don’t know what position the LarvaMobile has, and the steering would be difficult. You may add some end-switches and stuff. Complicated. So, servos it is.

The choice of control module was in my case done by choosing from 2 of Totem products, the X3 with a function board FBI-61, not sold separately, but used in some of our products, or the all-in-one X3-FBI board. With X3-FBI board you can control 2 servos with the Totem app on your mobile phone. It’s all I need for the LarvaMobile.

In my pictures of the LarvaMobile, you can see the X3-FBI-61 solution used. I had to use this when building, since I couldn’t find a 3.7V battery in my workshop, but I found a 7.4V, so that made me choose this combo. The X3-FBI board can take up to 7.4V, but many servos don’t like this high voltage. 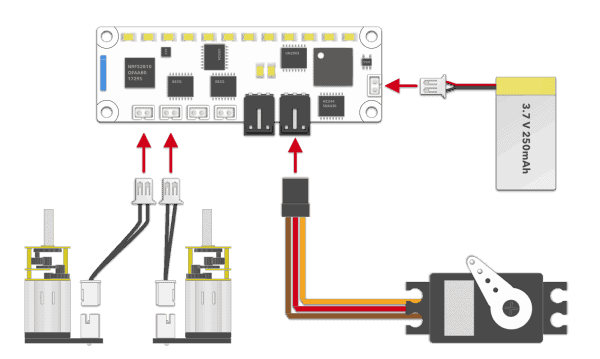 Those who want to try building this model, may have their own solutions, like Arduinos and BT/WiFi solutions, that you can experiment with. All are good just as long as they can control 2 servos.

Programming the movement and steering

I used the standard Totem app on my phone to control the LarvaMobile’s 2 servo motors. But one can make some cool programming of this model by coding it with behaviours, like short fast gaits, or long stretched gaits. The scissors’ servo can have a sinus-like movement with amplitude, frequency and mid-point.

I used the Totem app in a simple manner. Setting up just 2 sliders, one for each servo. One for stretch/contract, and one for steering.

The app setup is described here.

I made my setup of the app so one upper slider did the steering, and the lower slider controlled the scissors movement. I had to move my finger up and down all the time to make the LarvaMobile crawl steady.

With more advanced programming and more automatic control it should be easier to run the LarvaMobile. 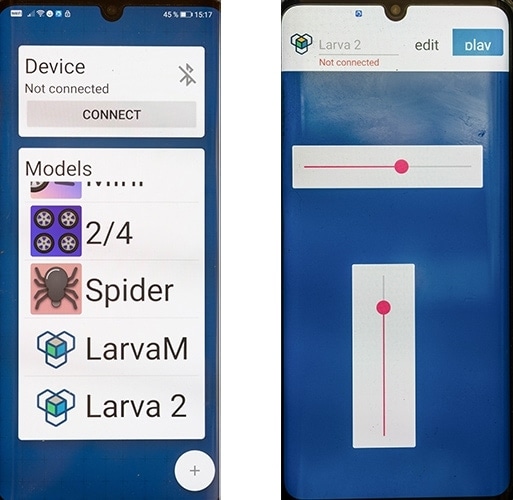 After finishing the model, I also had the 3D design file in SketchUp more or less 100% done. That’s the benefit of designing in 3D alongside building it real with Totem parts. The design files can then be shared with others.

For those of you who want to build this model, or even to make an improved one, you can find the design file in SketchUp format and other files here.
Everyone is welcome to mail us with questions and get the SketchUp file sent. Maybe you also have ideas of improvement and suggestions.

From Lars at the Totem Makers Lab. 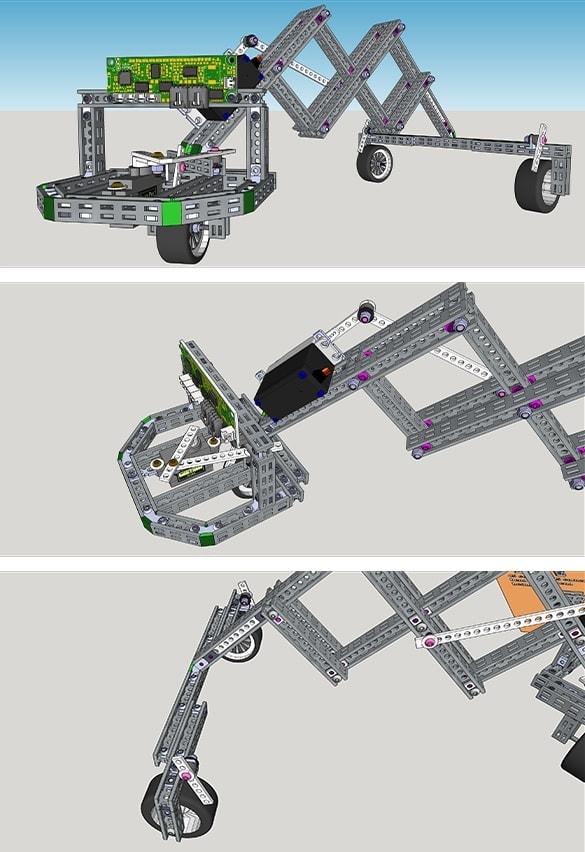